A hasty start from Cachora 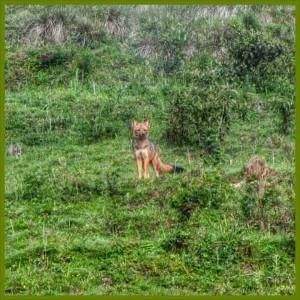 My journey to Cachora starts from Lima. After a 18h bus ride to Abancay, I realize this place doesn’t have much interest. I prefer to go directly to Cachora. I ask the locals in the street how can I get there and quickly after I am seated in a collectivo.

Here, I meet Eddu: a Peruvian fellow adventurer who already did the 4 days return trek to the Choquequirao ruins. Jonas, Eddu’s German friend, will jump in the collectivo 5minutes later after we stopped in front of his guesthouse.

Both only want to go to the Choquequirao ruins and then return to Cachora. However (thanks to Orux Maps) I would like to do something more adventurous: the integral Choquequirao Trek from Cachora to Aguas Calientes and the Machu Picchu. This is why I’m traveling for: being in the wilderness as long as possible to put to test my outdoor sport equipment and doing things other travelers do not seek for.
Nonetheless it is not without some risks and difficulties:

Firstly we are in the middle of the winter season: rivers are inflated by daily rainfall, it’s cold at night and it snows above 4300m. Showers and several chilly nights don’t scare me. I’m equipped with Goretex sportswear and a Valandré sleeping bag down to -5°C. However landslide and flooding do and require at least 2 people. Yes, I watched 127hours and these kind of risks are not worth taking when you’re alone. If I was sponsored maybe I would do it but that’s not the case.

Secondly I know there is a saddle at 4660masl. I have already experienced altitude sickness in the Cordillera Huayhuash from 4100m and I know its effects quite well: I got the biggest headaches I ever had, difficulties to stay focused and an important lost of my physical abilities.

With Eddu and Jonas, we buy several things for 4 days: rice, green pees, sliced bread, onion and carrots. Thankfully I did some shopping when I was in Lima to complete my meals with cereals. It’s six at night and Jonas wants to begin the Choquequirao trek straight away. My plan was to sleep one night in Cachora to walk a longer distance the following  day since their is an important asset from the bridge nearby Playa Rosalina to the campground of Marampata. It doesn’t make a big difference to me and all three begin our journey to the campground of Capuliyoc.

After we got lost once, I take the lead. Walking with the full Moon in the silence of the night is a pleasant sensation. The halo of the Moon moves on the clouds, influencing lights and shadows along the shapes of the mountains. Our progression on the flat dirt track is fast. We reached the campground of Capuliyoc a few hours after we started from Cachora.

The old man living here invites us to cook in its kitchen. While we are chatting, I ask him about the safety along the Choquequirao trek to the Machu Picchu. He will be clear:
“DO NOT GO THERE ALONE. It is winter time, rivers are powerful and there is no bridge to cross the Rio Blanco (a river behind the Choquequirao mountain). However there is a group with 4 mules one day ahead. If you walk fast you can catch them up in two days. You can buy food and supplies in the campgrounds on the way but it might cost you a few more Soles”.

This is my luck. From now on I have the opportunity to realise safely the full length of the Choquequirao trek: one of the two hardest treks in Peru with the alpine circuit around the Cordillera Huayhuash. 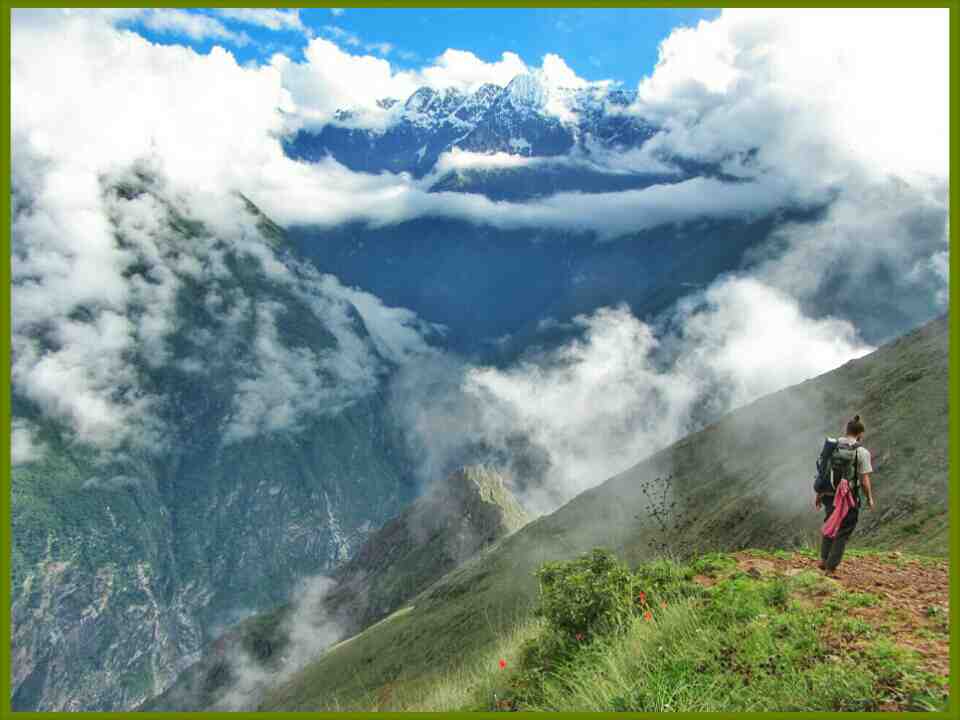 Is it luck or destiny? 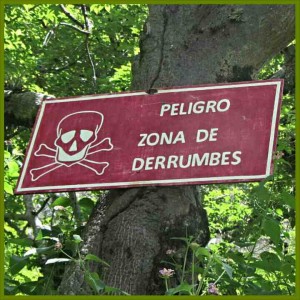 Before I catch up the group with the mules, all three of us plan to reach the Ruins of Choquequirao today. However Jonas doesn’t feel so well after we lost 2000 vertical meters. His right knee hurts a lot because he doesn’t use to carry a heavy backpack and he isn’t fit enough to absorb repetitive shocks for hours. From the bridge of Playa Rosalina he will never reach the campground of Marampata 1500m higher the same day. Eddu arrives to the campground 20 minutes later and explains to me the situation with Jonas. He will give me the third of the food we bought together the next morning. I leave early the campground and walk the last 4 km to the Ruins of Choquequirao.

It’s misty when I arrive on the archeological site. Nobody else than me is here to capture the ghostly atmosphere. I’m impressed by the size and by the building quality of Choquequirao. Drains run everywhere to provide water in the houses built on a leveled surface. 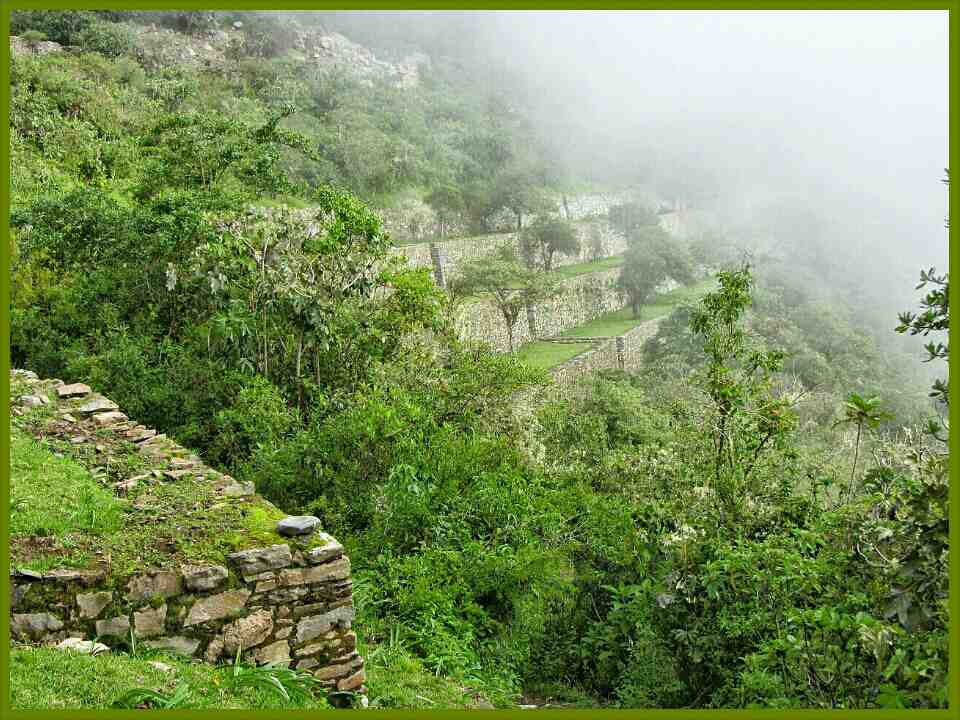 From the plaza a few meters underneath the summit of the mountain, I enjoy the 360° view inside and above the clouds. From this point I can see somebody going up the stairs. I made it: this Australian couple is the one going to the Machu Picchu. I ask to Hector (their guide and business owner of Choquequirao Trek) if I can walk with them. He doesn’t see any objections and invites me to keep up.

It is a good thing I’m with them because around noon we have to cross the river the old man warned me about: the Rio Blanco. Two nights before, he told me we will have to cross a river 4m width with water up to the waist. It could have been a critical moment with my 15kg backpack and the strong flow of the river if I was alone!

Thankfully none of us have to do that. A group of Peruvian is here since early morning and they just finished building a footbridge made from stones, trunks and branches less than an hour ago. The mules could also walk on it making this part easier for everyone.

After lunch, a similar afternoon than the previous one is expected: 1100m+ until the campground of Maizal. A long rainfall cools us down during our way up. I didn’t found the trail as steep as yesterday but mentally the campground was harder to reach. When I look my statistics on Orux Maps,  it posts more than 1800m+. With 15kg on my back, I’m quite proud. 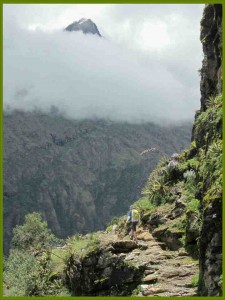 The forth day is an easy one with only 700m elevation gain to San Juan pass at 4150m. Again, we are lucky: we stay in the clouds that keep us cool until we reach the saddle. The view on the other side is jaw-dropping:  the Cordillera Willkapampa offers us its two closest summits (Pumasillo and Quriwayrachina) and its different affluents converge to the Yanama river. Unfortunately I won’t see any condor. The rain forces us to stop at Yanama and we will pass the Mariano Llamoja saddle at 4660m the next day.

The track along the Yanama river was quite dangerous with many landslides. Avoiding any kind of mistake wasn’t an option but a necessity with only a foot width keeping me from a 30m fall. Just above 4000m I start felling some difficulties to breath but I do not experience any headaches until I arrive to Totora on the other side of the saddle 1000m lower.

Should I pick up the easy way or start a boring one…alone? 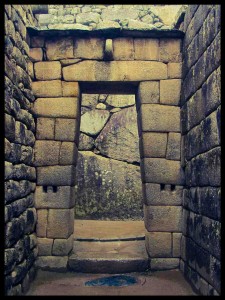 From Totora I cheated quite a lot for several reasons: the amazing dishes made by Jammy (the chief in the group) to which I started being invited after a couple of shared meals is the first one for sure! Then, the track along the down stream to the campground of Playa isn’t exceptional. Moreover at this period of time the trail is destroyed by several landslides. However I could have jumped off from the car at Playa and walk the two following days to Llactapata and Aguas Calientes. But without a stove to cook, without company to talk to and with an extensive lack of showers, I picked up the easy way. Today I regret it a little bit but that is not dramatic. It’s winter time after all, that impacts a lot the motivation when you have to brave alone the rain and the cold for a long period of time.

Instead, I will bath in San Teresa hot springs at night before another delicious dinner made by Jammy in company of Hector, Will and Claire!

The next day we are following the railway from hydroelectrica to Aguas Calientes just after a huge rain fall that started the night before. I guess that was the accumulation of all the showers we didn’t have while we were trekking in the mountains! About that, we were extremely lucky: that maintained the Rio Blanco at a lower level to build a bridge and made the Choquequirao Trek more enjoyable.

Finally on day 7, I will run to the Machu Picchu from the check point at the bridge to discover the seventh wonder of the world from the opening…before it gets crowded by 2500 people. 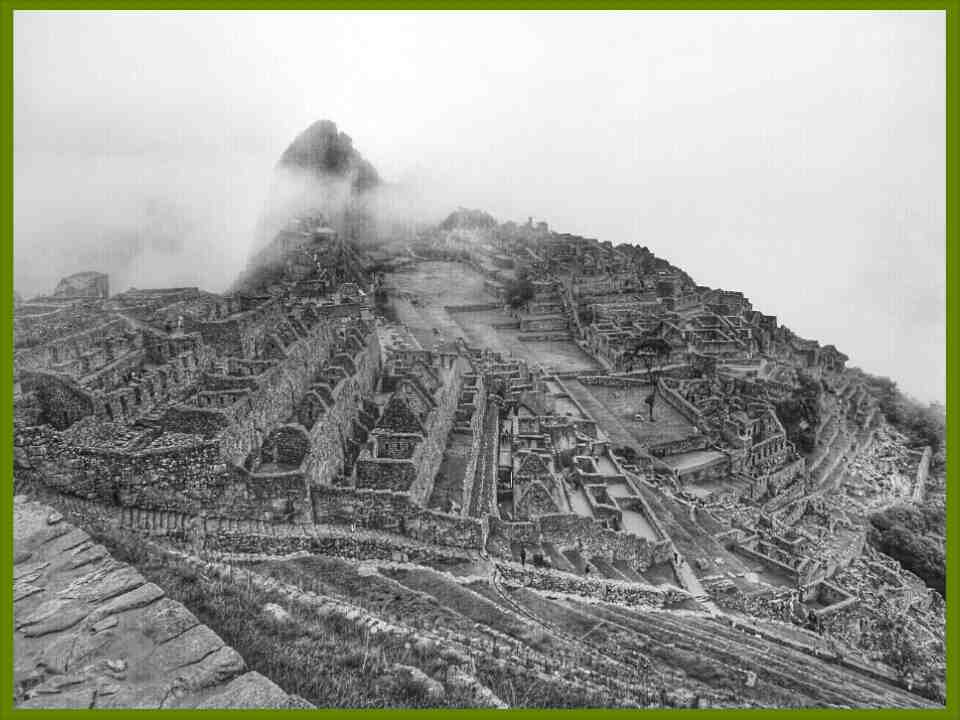 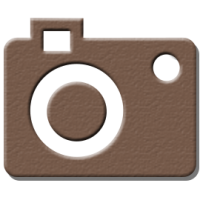 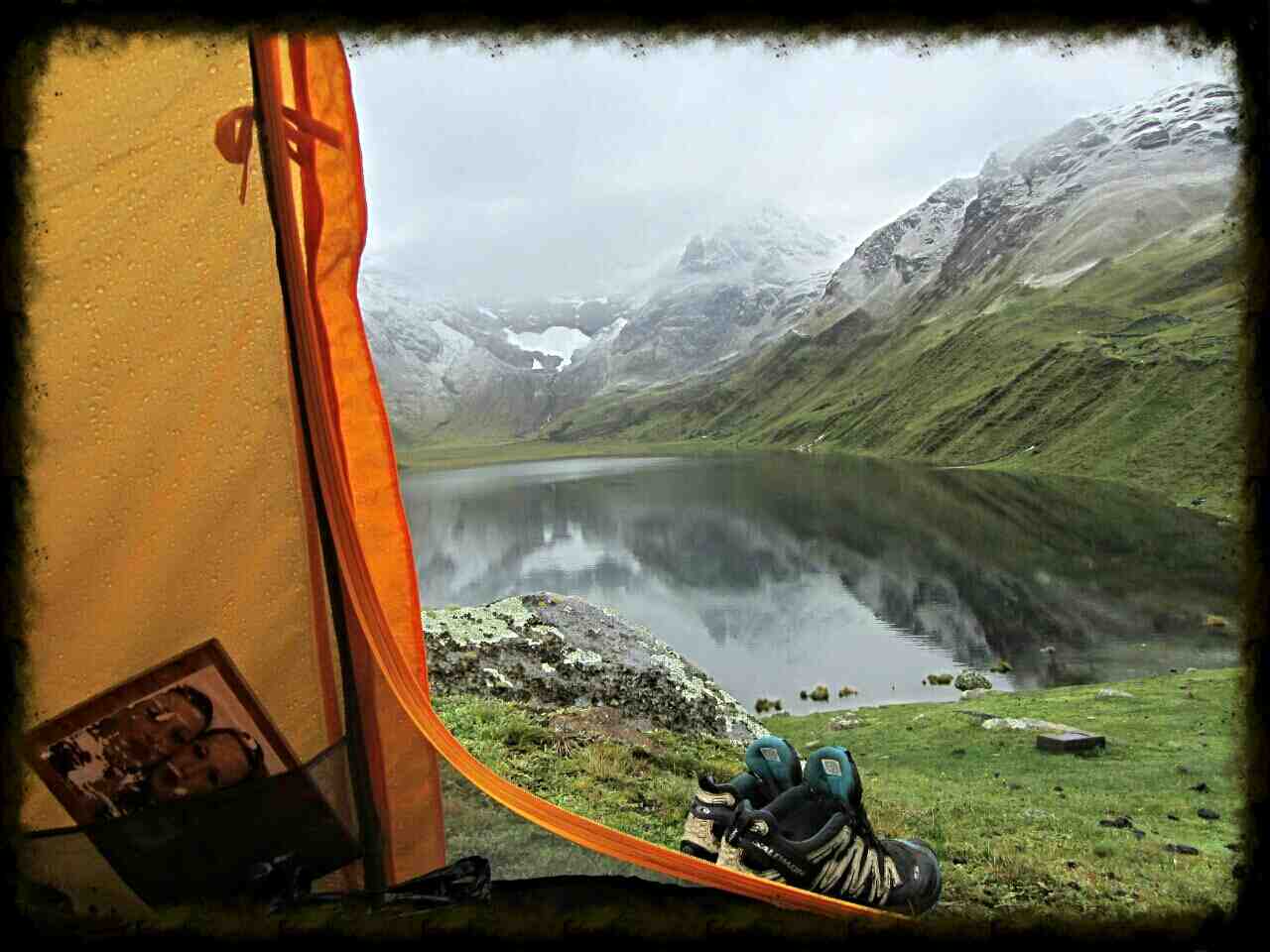 How I got there: Estenio, the family’s father I stayed with in Huánuco, suggested me to visit his childhood village: Choras. Nearby […] 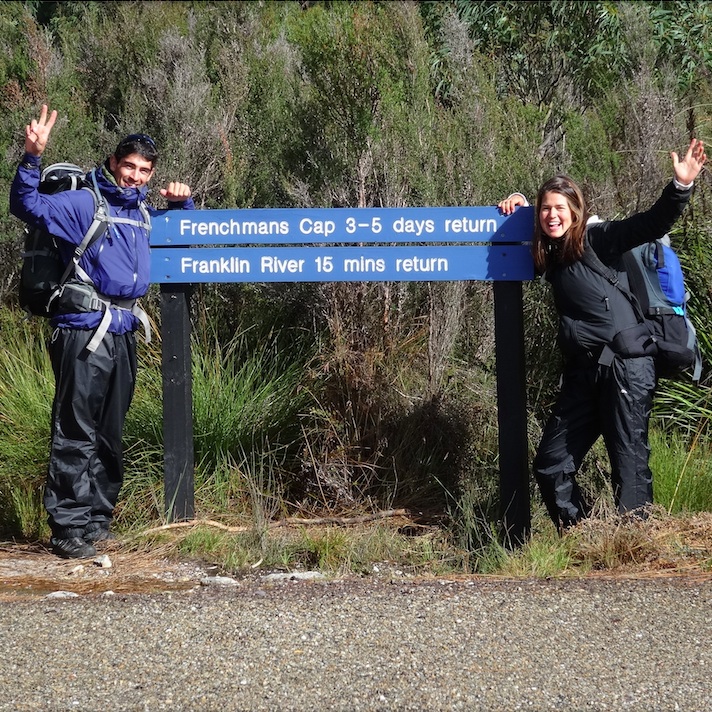 10 days after I left Lilydale, I meet Eliane in Hobart after Easter holidays. Together we have planned to go to Frenchmans […] 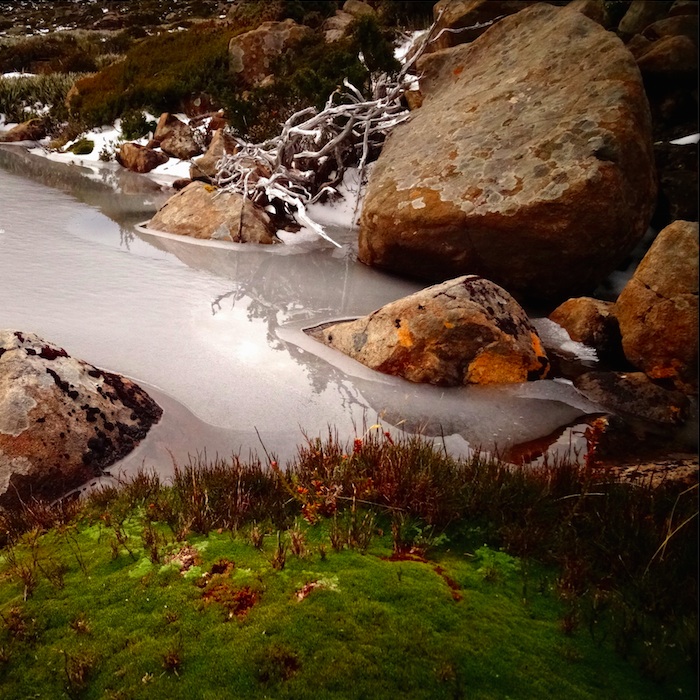 We just came back from Frenchmans Cap at the end of the week. I’m glad to remove my wet shoes after four […]

Las Peñas de Haya is a mountain in Spain in the Irun’s suburbs. The french noun about this mountain is translate by […]